The Craft Brewers Conference was absolutely huge in 2016.

Brewery owners, taproom managers, restaurant owners, franchisors, vendors and craft beer enthusiast all came together for one of the largest craft beer gatherings in the world. It was an absolute pleasure being a part of this annual event and strategically sharing our innovative beer flight paddles with the industry. Check out the Brewers Association’s CBC16 recap, then enjoy our fun little recap on what went down in Philly.

One day after this Tweet dropped, we had the opportunity to tour three different Philadelphia breweries and one great spot in New Jersey. The craft beer flowed as we started at the St. Benjamin Brewing Company taproom. After an interesting tour, it was neat to fire up the week with how much the team at this taproom loved our smart beer flight paddles. 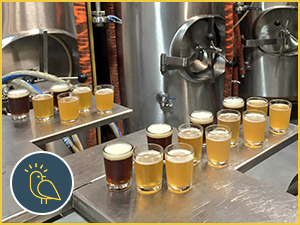 After a few beer flights and more conversation that has us excited to collaborate with this brewery, we cruised over to the Double Nickel tasting room in New Jersey. This is an example of a brewery that’s going big from the very beginning. They have a large brewing system, a great tasting room and are already starting to distribute their brews in cans all around the region. One interesting thing we learned about was how the state of New Jersey has certain educational requirements for taproom visitors. In short, if only craft beer is served, the establishment must provide an educational experience for visitors wanting to enjoy craft beer in tasting rooms. It’s an odd law, but the organic education that FliteBrite provides made it clear that our beer paddles solve real problems for New Jersey craft beer establishments. After a great time in New Jersey, we finished our tour at Bar Hygge and the Dock Street Brewery. This was a great time and a neat chance to build relationships with a few east coast breweries.

After recovering from a full night of brewery tours, it was time to get CBC underway. After eating our first cheesesteak and checking in at the venue, we stopped by the Orchestrated Beer gathering at Strangelove’s before heading to the CBC opening party. The opening event was at the Philadelphia Museum of Art. This place includes the stairs that Rocky ran up in those epic movies. Needless to say, there were a lot of people having fun posing with The Italian Stallion. After a fun chat with Ballast Point and talking with industry allies at this massive party, we hit the Sierra Nevada after-party to sample their Beer Camp project for the first time. Beer Camp is the ultimate example of breweries collaborating, so it was a perfect way to finish a great day.

The first full day of #CBC16 did not disappoint. Along with a few educational sessions, we spent most of the time interacting with everyone on the massive trade show floor. Our team decided that this was not the time to formally unveil our technology with a vendor booth on the show floor, but this was still a great opportunity to see what types of vendors attend this event and how to best interact this this exploding industry and within the craft brewing community.

After an entire day on the show floor, things got interesting. Our team is actively involved within the startup community, so with Philly Tech Week going on while we were in town, we had a neat opportunity to sneak away from the craft beer world to attend the Philly Startup Leaders community-driven event, Entrepreneur Expo, which turned out to be packed full of awesome entrepreneurs. After engaging with tons of amazing entrepreneurs, we cruised across town for the #IowaBeerSocial hosted at Devil’s Den and the Lagunitas after-party. Celebrating with all our friends from the Iowa craft beer community was definitely a highlight and with the brewmaster from Firetrucker Brewing celebrating his birthday, this turned into a night full of fun and tons of amazing brews.

The aggressive Wednesday night led to a slow start on Thursday, but we made our way to the Philadelphia Convention Center to finish exploring the Craft Brewers Conference. The show floor was so massive, it literally took two days to walk, so we had another great day interacting with vendors and sharing our electronic serving system with a few more craft brewing professionals. Even with a 5AM flight home the next morning, we still enjoyed dinner with leaders of the Philadelphia startup community and went up in the One Liberty Observation Deck to finish this adventure 54 stories above the city of Philadelphia.

#CBC16 was obviously terrific. Along with enjoying a crazy amount of craft beer and having an absolute blast, we also met tons of amazing new friends and had all sorts of meaningful interest in FliteBrite. This was the perfect way to “soft launch” our craft beer flight paddles and our team haw already starting filling pre-orders from breweries throughout the country. In fact, it’s neat to know that CBC lead to our first customer! The Waiki Brewing Company is serving great craft beer in Hawaii and we met at the Craft Brewers Conference. 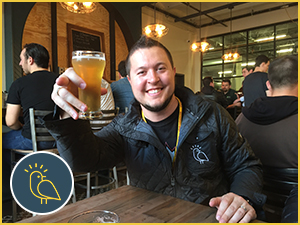 We continue to accept pre-orders with plans to ship our first round of paddles nationwide this fall. Our crazy first experience with the Craft Brewers Conference was epic and you know our crew is already planning big things for CBC 2017 in Washington DC. Here we come friends.

What is a Beer Flight?

The comments are now closed.